Activewear hits popularity peak, despite 76% of women feeling it can be sexist. Abby Chinery looks into the sportswear industy.

Sportswear as a fashion statement is soaring in popularity amongst women. The activewear industry is projected to hit £145 billion by 2020. That’s up from £117 billion in 2015.

Golfsupport.com, a male and female golf apparel site, wanted to explore the ‘athleisure’ trend, and what women’s motives are for wearing it. To do this, they have looked at social media analytics, retail reports, different activewear brands, and conducted their own survey of over 1,700 female participants.

Women have their say about the craze
What do women really think about the craze for all things ‘casual’, and what are their motivations for following it? Golfsupport.com have surveyed over 1,700 women, with the following discoveries: 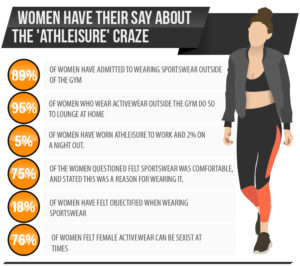 Surprisingly, most women choose to wear athleisure because it is comfortable, rather than because it is fashionable. In fact, only 3% of females stated that fashion was what drove them to sport the trend.

Is sportswear sexist?
Wimbledon 2017 was filled with masterstrokes, skilful forehands and courageous performances from female players. Yet, instead of promoting this talent, the Women’s Tennis Association chose to focus on the best-dressed player in her ‘Wimbledon Whites’.

The survey by Golfsupport.com also revealed worrying attitudes to activewear. Results showed a number of women who felt objectified while wearing sportswear. There also seemed to be a consensus that sportswear could be sexist. Here are a few comments from respondents:

“I find that some of the pants are cut too low, they often don’t cover enough of my hips/waist area. They are also often very tight, some of the necklines are too low, I can’t run in them without feeling like I will fall out because they expose too much. I have received many “cat calls” or sexual comments from men in these outfits, playing sports or not.”

“I do believe that current trends are sexualising sportswear for women, such as sheer fabrics and panels. It’s unnecessary and completely unrelated to what it’s designed for – exercise!”

Looking at popular athleisure brands, like Lululemon or Sweaty Betty, it’s easy to see why women would feel this way. Sweaty Betty in particular have leggings labelled as ‘bum sculpting’, said to “give you an extra lift”, with “carefully placed seams, high stretch fabric and wide waistband [to] sculpt your best bum ever.” This shifts the focus of sportswear from performance, to how you look. A focus not found in male activewear.

Research also revealed that activewear is typically priced at a premium compared to other clothing types. Furthermore, upon investigation, Golfsupport.com discovered that women’s activewear carried a higher price tag than its male equivalent. Searching in the sub category “gym” of activewear on ASOS, it was found that the cost of an item averaged out at £18.52 for women, and only £12.13 for men.